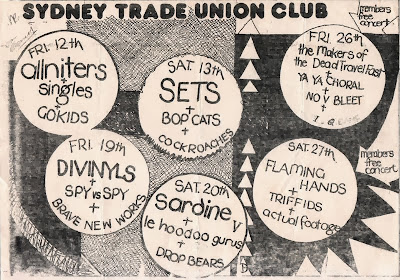 Here's a mixed bunch at the Trade Union Club. This must have been 1981 - 82. I must have been at at least one of these nights. Plenty of great live acts here.

I think I saw the Allniters 21 weeks in a row at one point. They were such fun, happy, upbeat gigs. We followed them all around Sydney. Often they got memberas of the crowd up on stage to dance around for the last couple of songs.

Flaming hands were another one we saw a lot. "Le" Hoodoo Gurus were still pretty alternative and unknown. I used to see them for free at the Southern Cross Hotel in Surry Hills. Now the Strawberry Hill. Their gigs in the coming years were some of the best live pub gigs I ever saw. Divinyls rocked as well. A great band, but you spent most of the time looking at Chrissy Amphlett's lips, and wondering if her ripped school dress was going to come completely off. Well, I did anyway.
Posted by Mark on 4/27/2008

Stuck at the STUC !!!
Allniters were a great nite out.
Saw Stu Crysell in the BEDHOGS at the Paris Theatre.. before he was in the Allniters !!

My names Rebecca and I was the adopted/fostered child of John Sinclair the President of the Sydney Trade Union Club for around 25years untill he died in 1924. I would love to hear from any one from that time that may have photos of or with my father and remember me as a little girl?

And of course there are the cockroaches third on the bill...well before they went on to become The Wiggles!