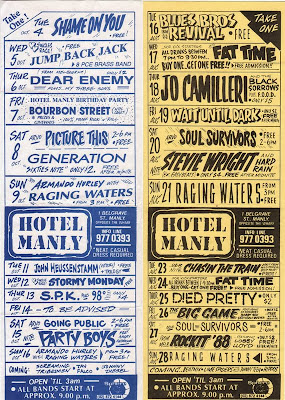 The Hotel Manly was a local for me for years. They had bands on six days a week, and got all the big local names. Ugly, dingy place, but an integral part of the Sydney circuit. They pulled it down in 1989, and left a pile of rubble there for a couple of years. At one point the council decided to charge us to park on this vacant, depressing site. Now there's a really good wood fired pizza place there and a Moorish restaurant, among other things. RIP, the Hoey Moey.

Died Pretty are one of my all time favourite bands. I was at this gig, and most probably many of the others on these bills. Joe Camilleri is still around, my band supported the Black Sorrows in Perth in about 1992 I think. Chasin the Train were a great rhythm and blues band. I mean actual rhythm and blues. We used to watch them a lot at the Cat & Fiddle in Balmain, too. Jump Back Jack were a great funk band featuring Jackie Orszaczky on bass and vocals. (I bet that IS how you spell it). He's still about, too. 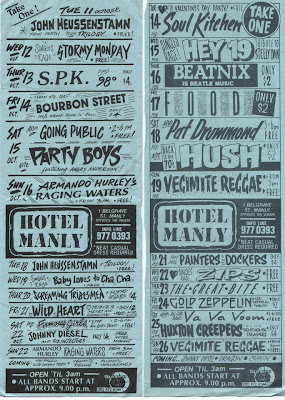 Vegimite Reggae were a Sunday arvo fixture at the Manly for a long time.

You can see the concept bands starting to creep in in a big way. Hey 19, Gold Zeppelin, Beatnix, Wild Heart, Blues Bros Revival...
Posted by Mark on 4/26/2008

Memories! I consider the demolition of the Hoey (it had that name well before the Hopetoun did) to be Year Zero of the 'new' Manly, ie. the overpriced whitebread suburb it is now. Vale.

Post midnight, you inhabited either the Hoey, Grouchos (at the Rugby Club-a sh*thole that served warm cans of VB) or Rolfes/Binjies if you were older.

Many a great gig. Slightly before my gig-going time, but I remember Motorhead were to play there (in the smaller public bar at the cop station end of the pub before they put the bands in the bigger room at the Wharf end) but they had to cancel as they couldn't get their gear through the door. Any truth to that one or am I dreaming it?

And as for the fights you'd see there & across the road at the cab rank...

Great blog.I've got a ton of flyers somewhere around that I ought to scan. Mid 80s onwards.

The Motorhead thing sounds like it may have been a dream... but what do I know?

Yeah, Manly is pretty much dead now as far as live music goes. You have to queue up to get into shiteholes like the Steyne or Ivanhoe pubs, to endure crap dance music with ten million teenagers. There is no music in Manly for over 35's, that's for sure.

Love to see your flyers...!

The Motorhead thing is true, The band had a semi trailer plus a pantech carrying their production. They had a double four way each side of the stage as a sidefill, This was what every major touring act at the time used as their FOH. Motorheads FOH rig was big enough to do the Hordern. The crew set up what they could fit into the smaller back bar leaving the rest in the truck. When the band arrived they cancelled the gig because the production was not up to their spec. Saw them at the Family Inn in Rydalmere They were load, I had earplugs and it was still load, the air moving from the Ws hit you full force, I remember a guy sitting in the front of one of them, surely his eardrums must have been bleeding!