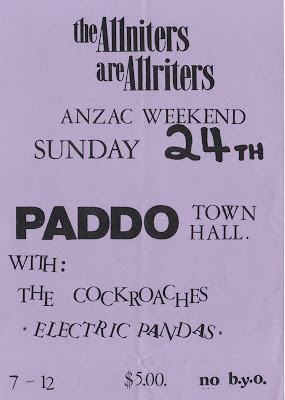 The Allniters. They're Allriters! A fun night out was to be had at any Allniters gig. We'd find our way to wherever they were playing, and somehow get home again in varying states of consciousness. I still don't know how we did it with pretty much no money and in the early days, no car. I guess things were cheaper and with a group of us we could pool our resources. The trouble with Allniters gigs often was that you'd end up with huge bruises on your shins the next morning, from dancing up the front with the skinheads in their bloody Doc Martins. Because of course, we had to be right at the front, centre of the stage. And so did they. 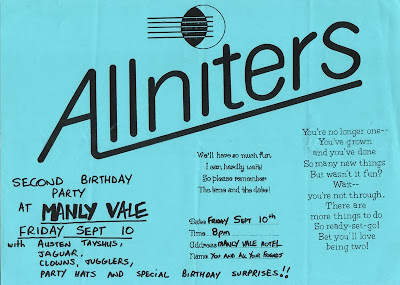 I think I can actually remember this one. The Manly Vale Hotel was a fantastic venue. A larger room with a higher stage than most pubs. It could put on overseas acts as well like UB40, Iggy Pop and others which will no doubt feature later. They pulled this great North Shore venue down at some point, probably because of noise complaints by neighbours - the usual excuse. I remember emerging from that place on countless occasions, drenched in sweat with a longneck of cider or something in my hand, watching the fights going on in the carpark from the top of the stairs - usually between the bouncers and some unlucky punter. 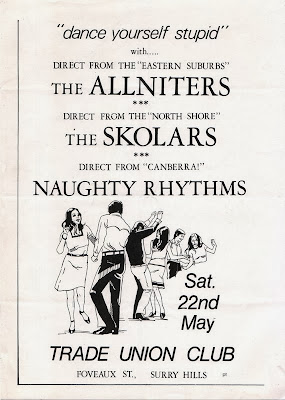 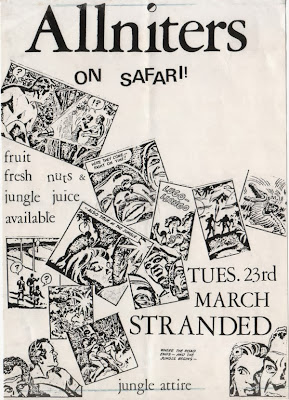 Yes I remember most of those gigs,Stranded was a fun place to get into when you were 15,try doing that today kiddies ha ha!,The Manly vale much missed like the Trade union club and so many others

Yeh I still have the free cassette given away at the 81 Xmas gig at STRANDED. I went to High school with Stu Crysell from the Allniters and saw him when he was in the BEDHOGS too.
I got along to as many Allniters and CLUB SKA gigs as I could...TOP STUFF LADS !