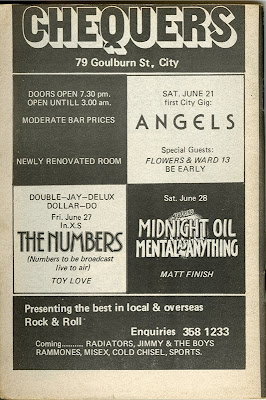 Check out this one. I never even heard of this place, although that doesn't mean I wasn't there at some point. They obviously got some good acts in there. Early days for INXS and the Angels - "first city gig"! June 28th would have been a good night... Icehouse were still known as the Flowers, and the Numbers were being recorded live for Double Jay. I wonder if they recorded INXS while they were at it?

I worked at Chequers in its next incarnation as a theatre restaurant. We were told that Shirley Bassey had played there in the 60's.

I went to some killer gigs there - Ramones, THe CUre, very early Sunny Boys. Great venue

I managed to get to see Shirley Bassey with my first love at Chequers in the 60's & it was a huge cost for me at the time but it was just spectacular, a night to remember.

rags/ chequers was just across from the civic
so we were always in there and always
pretty damn drunk .
so memories as hazy.
loved the civic,
the civic was home .
what was the landladys name ?
she used to look after us .

I was at all these gigs and more. Chequers and the Bondi Lifesaver were my haunts in 1980, I was also at the Lifesaver the last two nights it was open. Three top bands with anything up to six hours of music at five bucks and a dollar a drink, those were the days.

AC/DC played their first ever gig at Chequers in 1973.

This poster is an absolute classic like chequers was .as much as i liked the civic it will never be remembered with the same fondness

the night bon scott tried to pick up a friend of mine and was knocked back, or the night rose tatto started a brawl onstage....those were the days

I am glad someone else remembers seeing the CURE at Chequers!!!
(It is NOT in their tour date archives)
I went with my brother, but I cannot remember the date ???? anyone ????
I am glad it wasn't just a dream !
Bing.
PS Mark ..Great to see this period kept alive here THANKS

I saw the Cure at Chequers as well. Not sure what the date was though I remember it was the last day of school, not sure if it was for the term or for the year. So I can't really help with the date.

yep. can't remember the date(or even the year) that i saw the Cure at Chequers but I do remember it was so bloody loud 'cause the place was like a basement.now I'm seeing them at SOH and they'll be playing the exact same early songs. woohoo

I have fond memories of seeing Feather (Blackfeather) every week at Chequers in the late 1970's, must have been 1978, with Swanee/ John Swan as lead singer, Stuart Fraser as a young kid on guitar, Warwick Fraser on drums, and Mark Mitchell, Tony Mitchell's brother was also on guitar or was it bass? Fun times out on the town with friends.

I was there for all the postered gigs and more in 1980, a veritable who's who of Aussie pub rock at the time. The Oils gig filled it to above capacity and a later Chisel show packed even more in. Chequers and Bondi Lifesaver were unbeatable venues.

The Cure played the Capitol Theatre on 17 Aug. 1981 (so the Chequers gig may have been around then)...a Monday night...(we raced outta there and down to the Gov's Pleasure to see the Sunnyboys straight after).

I had the pleasure to play there in Johnny Dole & The Scabs Thursday 5th May 1977. We were asked to leave after the first set, this was just before Punk Rock was viable and had a bigger following, then around the mid 79 ALL the Punk Rock bands at that time got a chance to play there!!

I was at the Cure gig, must have been around 1981, sounds right. Fantastic gig, excellent sound. I had heard a lot of bands working around the Sydney scene since 1980, trogging mostly and The Cure had a big fat sound that oozed out of the front of house speakers like electric molasses. Awesome.

I managed Chequers during this period, and worked every gig we were only open which was only for about 6 months in 1980. The police shut us down which is a story in itself. The Cure certainly played there on their "Get a dose of the cure" tour. The Ramones were another overseas head liner.

Hi Hopguy , l couldn't recall the date.
Was there a support band ?
John77 has a poster maybe he could let us know
Great period for LIVE music !

here is a link to the 1981 Chequers date

Saw the Ramones play. One of my favorite memories of the time. It was too and sweaty. Johnny Ramone threw out picks. One landed in my arms. I still have it today.

Didn't The Numbers re-appear in the early 90s as The Maybe Dolls?

Chequers Gig was for the reopening as a music/rock venue in 1980.The Nightclub had been closed for some time .WARD 13 were a regular band as well as Chris Turner (ex Buffalo,Rose Tattoo + many others)He played there every week for 4 years.. I believe WARD 13 have remastered some old video and will be putting out a you tube video soon..Chris Turner is associated with Big Rock Records and has Recorded some blues CD's with Alex Smith ex Moving Pictures They play under the name iif The Old blue dogs.Irish John of WARD 13 is Recording an album with Chris Turner ,this should be out in a couple of months .ROSE TATTOO are playing a memorial gig for the late Pete Wells a founding member of the band, next month with special guest Lucy Desoto and her old band the handsome Devils .The Angels still perform with a new front man since 2011 Dave Gleeson who also fronts The Screaming Jets ,The Angels will feature on Rock The Boat Cruise in 2019