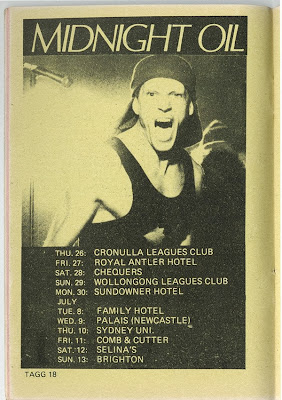 Oils. What can I say. Midnight Oil gigs are ones that I'll never forget. There will never be another band like them. Extraordinary live gigs. I don't remember how many times I saw them, but the energy and imagery from those nights is firmly hammered into the back of my brain. All great musos, amazing songs that everyone could connect to at the time, Garrett utterly rivetting to watch, adoring crowds of people who made the most of every opportunity to watch this unique and fairly rare spectacle. The place to see them was the Antler at Narrabeen. Have you seen that place recently? End of another era of Sydney live music. Tragic. Well that's progress on the Northern Beaches.
I saw Midnight Oil a couple of years ago on the Redneck Wonderland tour, but both they and I had become much older and the vibe wasn't really there for me...
Posted by Mark on 4/24/2008

Awesome Oils poster you got there. It appears this is from 1980 - so very early indeed. The best part of seeing them in that era are the memories, so until things go completely cloudy, at least you have those to remember the gig by. You didn't happen to see them at Tanelorn 1981 did you ?

Didn't go to Tanelorn. Saw them at Wanda Beach in 1982, Goat Island whenever that was, Capitol Theatre sometime around then... and lots of smaller gigs. Sometimes they went by the name Ebb Tide and the Breakers or something. You had to hear about those gigs - without SMS.

Wanda had the Oils double billed with Inxs from memory.

Absolutely. That was the first time I saw INXS. We all thought Michael Hutchence was a cross between Mick Jagger and Jim Morrison. You could tell they were good even then. The only song anyone knew at that time was "Just Keep Walking".

i remember seeing the oils at the astra in bondi

i vaguely remember his big hand coming at us
watching from the front .

They only ever played as 'Ebb Tide' once... at an Antler gig.

I saw them once at Brighton. If you recall in 1979 there was a beer strike and we had imported Emu Lager from the NT which they charged $1 a can for. The place was a sweat box and despite the price for crap lager we just had to drink gallons of it. Yes- I am old.

I too collect all manner of Posters, Gig flyers, set lists etc. and have a huge collection of oils stuff, maybe we can get some trading happening?? this one from head injuries is fantastic to see, I saw the oils play so many times and was privliged to see there final gig at Selinas (the last gig they played there I mean), when they blew the roof off the place. any time you saw the oils, you know, absolutely, you were in for something truly memorable, the Annandale comes to mind...

so Adrian, are you able to share some images of your Oils posters etc... that you have? I think you can click on my name to send me an email.

Great Blog, thanks! Wonderful to see all those posters again. There is certainly some excellent music and art around these days but unless you lived in places like Sydney during the late 1970's and early 1980's you can't really appreciate how productive the music scene was for both musicians and punters. I remember the $2 entry fee and $1.50 beers at places like The Mosman, The Antler, The Royal Sutherland, The Manly Vale, The Trade Union club, Strawberry Hills Tavern etc.

Thanks again. Do want any more posters? I have a few lying around.
T