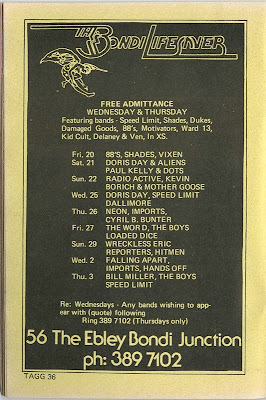 A Sydney legend and institution. At least for those who frequented this part of the world. I think every major Australian band of the era must have played there, and it was an industry type hang out through the seventies (before my time). It closed sometime in 1980, so these gigs must have been very near the end. 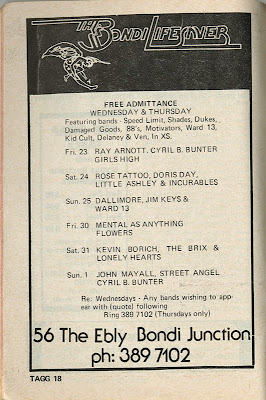 Kevin Borich! KB! The guy is still going strong. I saw him play a few months ago, and man, he can still blast out the heavy blues licks like he ever did. Greatest rock guitar face in Aussie history.

Rose Tattoo. Heavy shit. Believe it or not, I managed to fall asleep during a Tatts gig at Narara 1983. Right on the grass in front of the stage. Probably more accurately described as "passed out" perhaps. Narara. There's another story...

Icehouse are still Flowers. I guiss it is only 1980.

would you have any with HEAVEN ??

I used to go there too, I remember Angry and Marc Hunter djaying, I was too young to get in so used to climb the wall at the back.There's not much on the internet about it would love someone to write a book about those times!

nybody familiar with this e me sailtide@yahoo.com All of thes guys in the band were from Bronti..

i played at Lifesavers in 1975 with a band called Turkish Green from Bronti..Renee Gayor's Band Crossfire played there the same night..Murf was head of the band. Regee on guitar, Will on piano, Muff on drums.. mark felts was our groupie buddy. Anyybody know these people let me know sailtide@yahoo.com We would go to Speedy Gonzales mex restaurant in Surrey after the gig..I was a yank down on surf trip.

The poster was from June since that's the only month that had Fri 20th.

BONDI LIFESAVER - newish group on Facebook. If you have memories of the Swap and want to relive those times; get on board with us on Facebook. Kind regards *WEEZE*

as Weeze said, (without mentioning the ladies loo once), if you were a Swap regular search facebook for the Bondi Lifesaver group. But it's a closed group and only for broadminded people who were there and understand and appreciate it's... err... special ambience ;)