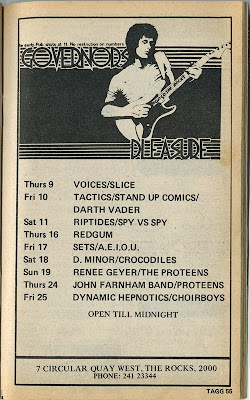 The Governor's Pleasure. A very regular haunt for us for some reason. I have thousands of bits of memories of that place. It was one of the very first venues I ever went to, while we were in high school. You had to sign a book at the front door, promising you were over 18, as there was pretty much no ID, especially with a photo on it. The place was a sweat house, a fire trap, a great place to see bands. Pancakes at the Rocks for dinner. Of course now it's a lingerie restaurant topless type of place for the discerning gentleman.

Spy vs Spy. Before they started with the whole Vspy Vspy thing which I never bought into. Fantastic three piece. I remember seeing them in the corner of a pub in North Sydney playing Stones covers before anyone had heard of them. Even then I knew they were good.

The Sets, I think were a Mod band. I had a few friends who were into the Mod scene. It seemed then you had to choose Mod/Punk/Rude Boy/Skinhead/Whatever. Don't really remember the Sets music, but used to frequent the Sussex Hotel a bit...

Just found your site. Loved the early eighties Sydney music scene especially The Singles.
The Sets were a mod band and even though I didn't go to see them alot, in the early nineties I met the guitar player (ended up playing bass in Stupidity) and married him!

I saw the Flaming Hands at the Guvnors. Julie Mostyn smiled at me.
Now there is a band that didn't get the recognition they deserved.

Hi Mate, great effort with the posters, I may have some stashed away. I was the drummer in the Proteens, I remember this Gig. I am also looking for Moving parts tracks, they were a great sydney band. see ya Maloo

Just stumbled on this site. Its great!! I used to play in a band called Fast Cars in the 1980's, the Governor's Pleasure was one of our fav gigs. Ah, those were the days!!! Keep up the good work of documenting this era. By the way, don't suppose you have any records of posters from Fast Cars?

was at the Govnuv's when the Riptides played with Spy v Spy - even remember what I wore - then onto the Trade Union Club ..was thinking about the singer from S v S the other day after seeing The King's Speech, as he stuttered too but not when he sang

Anonymous- here is the Singles live- I played guitar. http://youtu.be/7g5Thl0bW0g

Diannah- I played with you in Levitations. Send me an email at lesannees-steve@yahoo.com - love to catch up.
Steve

Diannah, my bro played bass in Fast Cars with you. Dave Pye. I was the young bloke at heaps of your gigs.

I was Very lucky to have worked at The Governor's Pleasure from 1980-85 and saw so many new bands at the time just starting and then In later years seeing them become famous...
It was a great time in Sydney for live Australian music...Shame its gone.
Neville

What a great venue, I was serving in the Navy in 79-80 and this was my go to venue when I was alongside.
Saw so many great bands, Matt Finish, Moving Pictures, Riptides, Spy, Borich and Tilders and a few I can not remember. Now we are infested with DJ's. Now where did I put that "Death to Disco" shirt, it's round here somewhere.