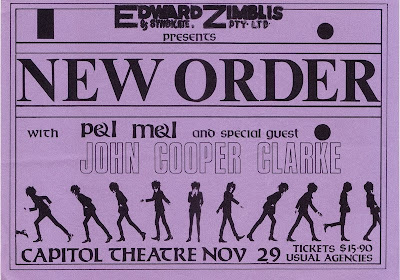 I saw this gig and nicked that poster. Superb.

Hey cool, I went to this gig . One of the best nights eva ;) I recall dropping some good acid and the evening began with a strange disjointed,unconnected feelings ...arrived at gig and promtly lost my crew in puff of weed smoke ...met up with a girl that once lived with my family when we were kids (cool) on entering capital I had to check my (extra belt)and they almost forced me to check my jacket because of all the studds.Found the crew inside pel mel were faultless ,cooper-clarke hilarious and New Order were like sublime....I 'm 47 years old now and this night is as fresh in my as yesterday it was all so good.the next morning I after being shagged senseless by the little girl I awoke somewhere near narrabeen without a cent ,had to hitch /walk home to malabar! ....thanks for your post.

Now THAT'S what I'm talkin' about. I'm so glad you guys rememnber the gig. Well done for nicking the poster, and well done for the senseless shagging!

I was at this gig too - I'd just turned sixteen. I thought New Order were utterly crap - apart from the fabbo encore they did with JCC (was it Beazley Street?), they might just as well've had their backs turned and played a record. Although... the first song they did was "Blue Monday", which hadn't been released yet. Hookey came out first and started belting away at some of those white octagonal syn drums that were the style at the time.
Unfortunately, my girlfriend's father was waiting for us when we got back to Epping Station - our parent's'd just found out she was pregnant. Ho hummm - she's 26 now and married!

Me again - the sixteen year old from the other day. Checked on that New Order/JCC encore - it was Lady Godiva's Operation!